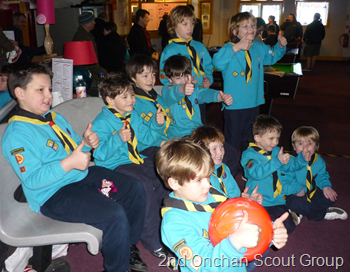 Over the weekend, Island Beavers took part in a Ten Pin Bowling Competition at Sure Strike Bowling & Leisure Centre in Ramsey. This was the first time the event had taken place in over four years, and 2nd Onchan were the last winners of the trophy – so the pressure was on! There were individual trophies for the Best Beaver – Under 7 and the Best Beaver 7 & Over. There was also a Colony trophy for the highest average score per Colony. 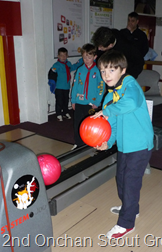 Eleven Thursday Beavers and 8 Tuesday Beavers took part in the competition. The boys did brilliantly and really enjoyed the morning. Harrison C from Tuesday won the Under 7 trophy with a massive score of 79 – Well Done! Oscar N from Thursday came 2nd in the same category with a score of 74. James H from Tuesday was 3rd in the 7 & under age group, scoring 81 points, and Thomas B from Thursday came 4th with a score of 80 – well done boys!

The overall winner of the trophy – the Colony with the highest average score – was 2nd Onchan TUESDAY Beavers!! Well Done! Their average score was 70.43. Thursday Beavers came 2nd overall with an average score of 65.54. Well done to everyone who took part.