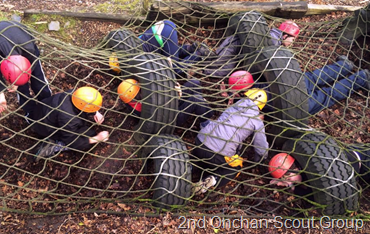 Over the weekend of the 21st February, Moddey Dhoo Tuesday Night Scouts enjoyed a two night camp at the Watertrough cottage.

After picking sleeping spaces, unpacking roll mats and settling down, the Scouts hiked to the back of South Barrule Plantation. On the way we stopped to look at the stars as it was an especially clear night and offered a great view of more stars than many of the lads had ever seen. After a further short walk the Scouts took out the Trangia Stoves they were carrying and boiled water to make Tesco Value cup a soups. Unfortunately the scouts did not appear to particularly enjoy the budget supper with many asking if they could have Heinz! 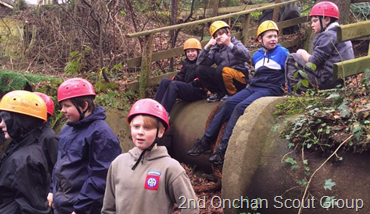 After a good night’s sleep the Scouts all got up at 7am on Saturday morning to eat breakfast before the Venture Centre picked them up and took them to Maughold. What followed was a day of air rifle shooting, archery, abseiling, the assault course and a crate stacking challenge. David H. was the best shooter while Alex R. was the best crate stacker coming first and second after taking part twice.

Upon returning to cottage the Scouts ate a dinner of spaghetti bolognaise and went out for a team wide game. In between rounds of the game the camp fire was prepared and the Scouts roasted marshmallows and drank hot chocolate.

Once it was too dark and cold to stay outside the Scouts retreated to the cottage to play cards and go to bed.

On Sunday after another good night’s sleep, the scouts went to Ape Mann to take part on a low rope course and zip line. Following more hot chocolate the scouts packed their bags, built bivouacs and went home.

The camp was designed for the Scouts and so I have left the scouts to outline their highlights below.

David H. On the Watertrough Cottage Camp I enjoyed going to Ape Mann as it was a bit challenging and something new. Unfortunately I did hit my back on the second time around the course which made me feel a bit ill, this made me not want to go on the zip line as it would not be pretty and the hot chocolate, a lot better than Tesco Value soup also made a bit more like a hot watery cup.

When we went to the Venture Centre I enjoyed the air rifle shooting. I liked that they had new air rifles; they were actually calibrated this time, which meant I got a good score of a disputed 72-74 points out of a possible 80. The assault course was fun and the wide games we played at the hut (which had no electricity) was a bit uncomfortable when I had a rock sticking into my side the entire 15 minutes we were hiding. When I got caught hiding in my combat jacket and trousers the second round of hiding I went and roasted some starburst which was surprisingly nice. The worst thing about the camp was the sleeping conditions. I had to lie on a hard roll mat and my pillow was wet so I had to go without it. I thoroughly enjoyed the camp but next time I need to remember to bring some hand warmers and not to forget to bring a new roll mat, also bring some Heinz beans, I am not as happy with Tesco Value beans but they are ok but Heinz are better.

I give the camp 9/10. Laser Mayhem… you are ALWAYS busy it seems.

Tom J. On the camp I expressly liked the Venture Centre, the Ape Man and THE BEANS. Also the coal fire was warm also I loved my Jaffa’s. The soup was mank, Marks cooking made Tesco taste like M&S. I slept quite well. I enjoyed the camp.

Sam N, This camp was fun. We did lots of fun actually for instance on Friday night we went for a hike and cooked some horrible soup on a Trangia. On Saturday we went to the Venture Centre to do air rifle shooting, archery, assault course, abseiling, climbing wall & crate stacking.

On Sunday we went to Ape Mann to go on the course, zip wire and go up a tree. There was hot chocolate. We slept on shelves and it was reasonably warm. We also played tons of cards. The bad thing was we spent two days going to a portaloo.

Magnus B. My favourite part was at the venture centre and Mann Ape although Luke made me fall it was fun.

Adam C. On the camp we had a ton of fun like the venture centre and wide games and food like bolognaise and really bad Tesco Value soup

Luke S. It was fun. I enjoyed Go Ape. I also enjoyed playing Blackjack. The cottage was freezing until we lit the fire.

Alex R. The camp was great. We did so many fun things, like high ropes, crate stacking and cards. It was fun because we were on bunks and there was a big ladder. I liked everything even the Jaffa’s.

Elliot N. On this camp we had a blast going to the Venture Centre and we learnt how to play Blackjack. I’d prefer it if we didn’t have Tesco Value.

The forest was good even when I fell in the river. The Jaffa Cakes were awesome.

Archie S. I enjoyed the wide games and the car games. I also enjoyed the ape Mann and the venture centre. The cottage was warm when the fire was going. 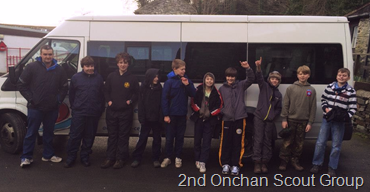 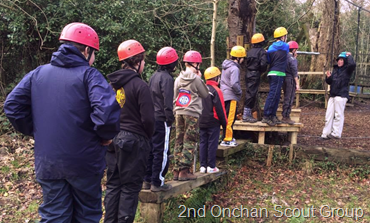