We had nineteen Scouts from the Moddey Dhoo and Phoenix Scout Troops attend the Island Scout Camp over the weekend of the 28. – 30. June 2013. 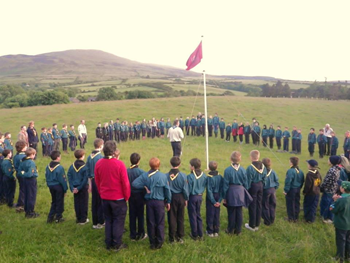 On the Friday the Scouts only had to put up one Patrol Tent, as two had been left up from the previous weekends Cub Camp. Flag Break was held at the Albert Tower, once the slow walkers and bits of flag pole had arrived. Back on site it was supper and off to bed for 22:30. The Scouts were all up again at 23:00 as fireworks started going off in Ramsey for the start of Royal Ramsey Week.

Saturday was a day of ticketed activities, which included Gorge Walking, Backwoods Skills, Kayaking, Pioneering, Raft Building, Archery, etc. In the early evening the Scouts took part in Orienteering before being entertained by a juggler. There was then a short camp fire and after supper a movie in the ‘ark’.

A pretty good camp and we only had trouble from the midges on Friday night.