Thursday Beavers are the reigning Champions and holders of the Sports Day Trophy. We had a good turnout of eleven boys, only four of whom had competed last year. We also undertook the usual two weeks of training prior to the event. We are delighted that not only did Thursday Beavers win the Trophy for yet another year, they won in style – with fifteen first places out of a total of thirty races! They also won the running relay, despite a fall at the start which put them at the back of the field, and they won the water relay, in spite of the small jug and bucket!

All those who took part finished in the top three in at least one of their races – a remarkable result, so very well done to Harry, Ryan, George, Oscar L, Luke, Alex, Lee, Fergus, Evan, Charlie & Oscar N! 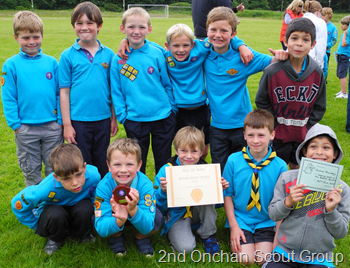 Thursday Beavers finished the afternoon with 317 points and in second place came Tuesday Beavers with 186 points. All round a great afternoon for 2nd Onchan Beavers. The competition continued in the Leaders’ egg & spoon race with Lee beating Jane to the post, however it was noticed that there was some cheating going on! 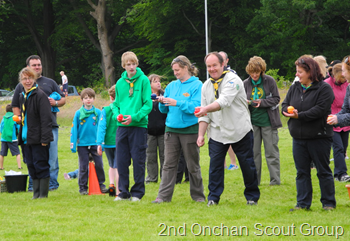